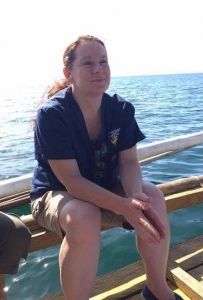 I remember the first time we entered the port of Catbalogan on the Island of Samar, Philippines it instantly reminded me of Mos Eisley, a spaceport depicted in the 1977 film Star Wars. It was a chaotic, funky and somewhat dangerous-feeling place filled with the strangest sights, smells and characters I had even seen. Later I learned that the 8th Infantry Division, Philippine Army, known officially as the Storm Troopers (also found in that movie) are stationed there, combating local communist units and terrorists.  Cabalogan is one of the portals through which one can enter the most magical part of the Philippines, it’s waterways filled with over 7000 islands. Most of them are quite small, dotting the deep blue seascape with their green palm trees and dark rock formations. As you approach them, the shallower water becomes a lighter blue-green that allows the sunlight to penetrate, revealing colorful corals and reef fish below.

This is our second catamaran trip through this tropical portal to the beautiful island of Maagan.  There has been only one previous medical mission on Maagan. That was the visit we made a year or so ago. This tiny island community is sustained by harvesting the plentiful crabs, mussels, shrimp, squid and other shellfish found just offshore. The Nazarene church there was destroyed in a recent typhoon and is being slowly reconstructed. World Mercy Teams has partnered with the Pastor and his congregation to provide a free medical clinic to the entire island community.

Water. The most necessary nutrient that we consume. It is fitting that Jesus compared this all important element to the indwelling of the Holy Spirit in the believer.

As we began interviewing them, we discovered that a large number of island women had symptoms of urinary tract infections and they subsequently tested positive for a UTI. I became alarmed by this when I discovered the cause. You see, there is no fresh water on the Island during the summer. The water that is brought in is rationed, a set amount per family. So these women simply avoided drinking water so that their husbands and children could have a little more. They were not producing enough urine to flush out their urinary tracts, allowing time for bacteria to multiply and cause an infection.

Jesus once asked a certain Samaritan woman, “Will you give me a drink?”  The Samaritan woman said to him, “You are a Jew and I am a Samaritan woman. How can you ask me for a drink?” (For Jews do not associate with Samaritans). Jesus answered her, “If you knew the gift of God and who it is that asks you for a drink, you would have asked him and he would have given you living water.” – John 4:10

Jesus went on to tell this “Woman at the Well” that if she drank from this living water, she would never thirst again. Another time, as Jesus was teaching in the temple, He said, “Let anyone who is thirsty come to me and drink. Whoever believes in me, as Scripture has said, rivers of living water will flow from within them.” –John 7:37

Jesus was speaking of the Holy Spirit that indwells the believer upon receiving Jesus as their savior. The Holy Spirit is our helper, allowing us to see the world through the eyes of Jesus, to touch and heal and comfort those who are hurting in the world around us the way Jesus did.

Water. The most necessary nutrient that we consume. It is fitting that Jesus compared this all important element to the indwelling of the Holy Spirit in the believer. As we packed up to leave our little island community, I prayed that their lives would be filled not only with plentiful water to drink, but the Living Water that Jesus spoke of in the scriptures. For without this water, there is no life.